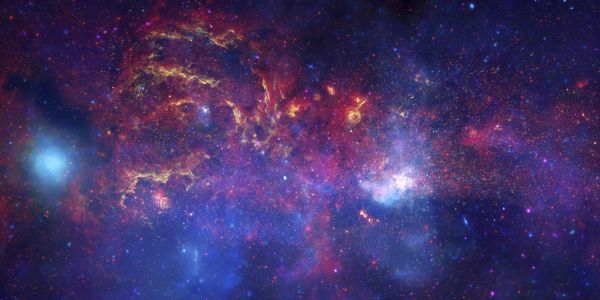 Astronomers have detected a strange, repeating radio signal near the center of the Milky Way, and it’s unlike any other energy signature ever studied.

According to a new paper accepted for publication in The Astrophysical Journal and posted on the preprint server arXiv, the energy source is extremely finicky, appearing bright in the radio spectrum for weeks at a time and then completely vanishing within a day. This behavior doesn’t quite fit the profile of any known type of celestial body, the researchers wrote in their study, and thus may represent “a new class of objects being discovered through radio imaging.”

The radio source — known as ASKAP J173608.2−321635 — was detected with the Australian Square Kilometre Array Pathfinder (ASKAP) radio telescope, situated in the remote Australian outback. In an ASKAP survey taken between April 2019 and August 2020, the strange signal appeared 13 times, never lasting in the sky for more than a few weeks, the researchers wrote. This radio source is highly variable, appearing and disappearing with no predictable schedule, and doesn’t seem to appear in any other radio telescope data prior to the ASKAP survey.

When the researchers tried to match the energy source with observations from other telescopes — including the Chandra X-ray Observatory and the Neil Gehrels Swift Observatory, as well as the Visible and Infrared Survey Telescope for Astronomy in Chile, which can pick up near-infrared wavelengths — the signal disappeared entirely. With no apparent emissions in any other part of the electromagnetic spectrum, ASKAP J173608.2−321635 is a radio ghost that seems to defy explanation.

Prior surveys have detected low-mass stars that periodically flare up with radio energy, but those flaring stars typically have X-ray counterparts, the researchers wrote. That makes a stellar source unlikely here.

Dead stars, like pulsars and magnetars (two types of ultradense, collapsed stars), are also unlikely explanations, the team wrote. While pulsars can stream bright beams of radio light past Earth, they spin with predictable periodicity, usually sweeping their lights past our telescopes on a timescale of hours, not weeks. Magnetars, meanwhile, always include a powerful X-ray counterpart with each of their outbursts — again, unlike ASKAP J173608.2−321635’s behavior.

The closest match is a mysterious class of object known as a galactic center radio transient (GCRT), a rapidly glowing radio source that brightens and decays near the Milky Way’s center, usually over the course of a few hours. So far, only three GCRTs have been confirmed, and all of them appear and disappear much more quickly than this new ASKAP object does. However, the few known GCRTs do shine with a similar brightness as the mysterious signal, and their radio flare-ups are never accompanied by X-rays.

If this new radio object is a GCRT, its properties push the boundaries of what astronomers thought GCRTs were capable of, the researchers concluded. Future radio surveys of the galactic center should help clear up the mystery.