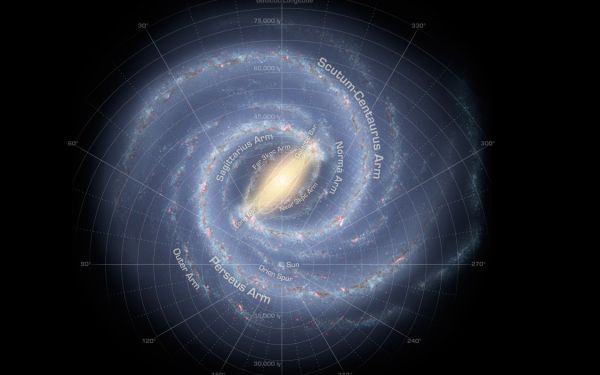 Astronomers have discovered an enormous new filament of gas and dust hanging at the outer edge of our galaxy. Nicknamed “Cattail,” the feature is not yet fully mapped, and the team who found it believe it could be a previously unknown arm of our Milky Way galaxy.

The Milky way is a giant spiral galaxy, which has a central bulge surrounded by coiling arms containing stars, gas and dust. Our home galaxy has four known spiral arms — two major arms named Scutum-Centaurus and Perseus, and two minor arms squished between them named Norma and Sagittarius, according to NASA. Earth is on a branch of the Sagittarius arm named the Orion Spur.

FAST sees the universe through the radio portion of the electromagnetic spectrum and so is particularly useful for looking at cold gas clouds containing hydrogen, Qiu added. While observing Cygnus-X, which is an enormous star-forming region located around 4,500 light-years away, Qiu and his colleagues noticed clouds of hydrogen gas that seemed to be far behind it.

By combining the FAST observations with data from a telescope in Germany and another in Australia, the researchers were able to map the feature, which stretches across nearly 3,600 light-years at a distance of around 68,000 light-years from Earth, making it the largest and most distant giant gas filament ever seen.

The team estimated that Cattail contains as much mass as 65,000 suns, and its true extent might be even larger, perhaps as long as 16,000 light-years across. They detailed their findings in a paper posted Aug. 4 to the preprint database arXiv that has been accepted for publication in the Astrophysical Journal Letters.

Cattail is at the outer edge of the Milky Way, located around three times farther from the galactic center than we are. Most of our galaxy’s bulk is closer to the center, making the enormous feature a bit of a puzzle.

“We don’t know how such a huge filamentary gas structure could form in such an extreme location,” Qiu said.

As yet, he and his colleagues are unable to determine if Cattail is a standalone gas filament or if it wraps around and connects somewhere to the main portion of the Milky Way. It could be a previously unknown arm or a branch from one of the four main arms, Qiu said.

Many questions remain about the feature. Our galaxy is thought to be warped at its edges, but Cattail doesn’t seem to follow that same warped pattern, said Qiu. He and his team have plans to further investigate the filament with FAST in order to better understand it.

“It reminds me that there’s a lot we don’t know about the Milky Way,” Felix J. Lockman, an astronomer at the Green Bank Observatory in West Virginia who was not involved in the work, told Live Science. “Every time we seem to look deeply, there’s more information in there.”

Because FAST provides better resolution than previous radio telescopes, Cattail could be a part of the galaxy that simply hasn’t been noticed before, he added. The fact that the feature doesn’t appear to follow the galactic warp in the area is strange, Lockman said, though the warp’s exact details are still a matter of debate.