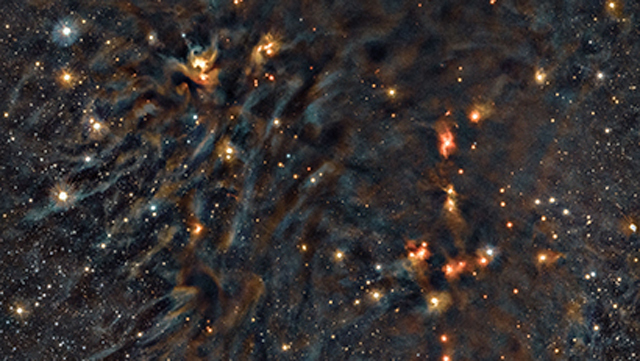 A wave of exploding stars may have provided the conditions required to build the solar system.

New research probing a nearby star-forming region examines conditions that may have been similar to those found in the early solar system to try to solve the outstanding mystery of how radioactive elements essential to planet formation arrived in the environment around the sun. The new finding concludes that such particles are common in star-forming regions, suggesting that the processes that formed the solar system are readily available throughout the galaxy.

Scientists used the tiny clues of some of the first solid material that condensed from the cloud of dust surrounding the newborn sun, material that later built the planets. A key ingredient here is aluminum-26, an element built inside of stars and one that has a relatively short lifetime of roughly 100,000 years. Because the first planets likely took a billion years or so to form, this element’s presence suggests a nearby source.

By observing the conditions found in the nearby star-forming region Ophiuchus, scientists have determined that the most likely source of aluminum-26 for our solar system is a series of nearby supernovas, rather than a single fortunate event.

“Most of the work on understanding the source of aluminum-26 and other short-lived radionuclides in the solar system has, by necessity, been quite idealized,” John Forbes, an astronomer at the Flatiron Institute in New York City and lead author of the new research, told Space.com by email. “Ophiuchus offers us a real example for how this may play out, which is extremely useful when dealing with such a complex process.”

The research was published today (Aug. 16) in the journal Nature.

The researchers hunted aluminum-26 by focusing on calcium-aluminum rich inclusions (CAIs), which are submillimeter-sized grains found in meteorites. Planets form when material left over from the birth of a star condenses into smaller clumps. CAIs provide a substantial source of heat during planetary formation, drying out worlds and reducing the amount of water that survives. But where did these tiny fragments come from?

Aluminum-26 is one of many metals produced in the fiery heart of massive stars. When the star goes supernova and explodes, it spreads its innards across the nearby galaxy. Theoretically, a single supernova could be the source of all of the aluminum in the solar system. However, according to Forbes, current estimates for the aluminum yield of supernovas just aren’t high enough most of the time to explain our solar system.

“For certain masses of stars that go supernova, enough aluminum-26 is produced, but because of the rapid decay of aluminum-26, that supernova would have had to happen extremely recently and be in the right mass range,” Forbes said. “It’s possible, but not probable.”

Ophiuchus is a typical star-forming region located near the solar system; right next-door to it is a cluster rich in massive stars. Giant stars are short-lived compared to the extensive life of the sun: a star 8 times as massive as our own will live for only 40 million years, compared to the sun’s 10-billion-year lifetime. This mortality makes them bad neighbors, as they can heat up gas in nearby planet-forming regions, destroying planetary cores and disks in the process. But giant stars balance this planetary interference by sharing a ready supply of aluminum-26 when they explode, material that can aid in the formation of planets.

By studying Ophiuchus and its neighboring massive stars in multiple wavelengths, Forbes and his colleagues determined that the disks that would eventually form newborn stars in Ophiuchus would most likely be inundated with aluminum-26 from their dying neighbors. Because Ophiuchus is a typical star-forming region, with nothing that marks it as significantly different from most, this suggests that most stars, our sun included, receive a flood of aluminum-26 from their neighbors before they are born.

The team also looked for Wolf-Rayet stars, which are more than 20 times as massive as the sun and have also been considered as potential donors of aluminum-26. Wolf-Rayet stars produce extremely strong winds, especially as they near the end of their lifetimes. These winds strip the stars of their surface material, which includes aluminum-26, and blow it into the neighborhood. According to Forbes, it is possible for a single Wolf-Rayet star to produce enough aluminum to account for the material found in the early solar system.

When they studied the star-forming region of Ophiuchus, however, the team found no Wolf-Rayet stars to seed aluminum to its neighbors. “One could have died in the past million years but compared to a handful of supernovas going off in that time, it’s just less likely,” Forbes said.

The new research has important implications for understanding the early solar system.

“The finding that aluminum-26 is going to be readily available to some forming planetary systems is very exciting,” Fred Ciesla, a planetary scientist at the University of Chicago, told Space.com by email. Ciesla, who was not part of the new research, studies early solar system formation and how CAIs contributed.

“Given the many roles that aluminum-26 played in the formation of our solar system, this means those same processes may have operated in other planetary systems,” Ciesla said.

The explanation of aluminum-26’s arrival from multiple stellar deaths doesn’t come without its challenges. In order to match observations from meteorites, scientists need to not only address the quantity of aluminum, but also to explain a so-called “global reset” of the aluminum in the stellar disk to synchronize their radiogenic clocks to give them the same apparent formation period. Such a reset would require a global heating event that would vaporize all of the solids in the solar system.

Such a reset could have been caused by an outburst from the forming sun or from an extremely nearby supernova, but Forbes admits both these hypotheses have drawbacks. Although outbursts have been seen in forming protostars, such explosions would only be capable of heating the disk out to roughly the orbit of Mars, while planetary formation continues farther out. Meanwhile, explaining it with a nearby supernova would require extreme precision — it would have to be close enough to sufficiently heat the disk but far enough away to avoid destroying it completely, which Forbes calls “quite an unusual situation.”

The researchers favor a variant of the first option, one in which the angular momentum of the planetary disk is turbulent enough to eventually bring all of the material within reach of the young star as it flares.

But Ciesla is wary of that explanation. He points to dust grains in meteorites that show signs of formation around other stars. These grains would be destroyed in a global heating event. Water would also be a problem. Scientists think that some of the water in the Earth, asteroids and comets came from the early solar environment based on these objects’ concentration of heavy water. In the global heating event called for by the authors, that water would react with other hydrogen molecules and the heavy water enrichment would be lost.

“This has not happened, as we see that heavy water, so the global heating must not have happened,” Ciesla said.

He pointed toward what he refers to as the generally accepted paradigm within the meteoritic community. The CAIs most likely formed close to the sun, perhaps by the same flares considered unlikely by the authors, then were redistributed through the disk of material by the mixing process.

According to Ciesla, the short period of CAI formation may be due to a combination of the small time frame that encompasses when the sun was both hot enough to form CAIs including aluminum-26 and distribute the CAIs in the disk through its evolution. Such a process has been explored by several researchers, including Ciesla.

“It’s certainly possible that you could explain the level of aluminum-26 in the solar system with some production of the sun via cosmic rays, but I’m not certain that this works for other short-lived radionuclides whose daughter products are seen in meteorites,” Forbes said.

He also pointed out that the aluminum-26 his team observed is centered on the cluster of massive stars next door to Ophiuchus.

“The fact that there’s abundant aluminum-26 available right next door to this star-forming region is really suggestive that the enrichment happens by mixing in aluminum-26 produced by nearby massive stars,” Forbes said.

Ciesla remains heartened by the idea that aluminum-26 would be available to other worlds in the galaxy.

“While we know that planetary formation is robust, the question is how unique were the conditions and evolutionary pathway that our solar system followed,” Ciesla said.

“This paper tells us that having aluminum-26 is not a very unique aspect of our solar system’s story.”