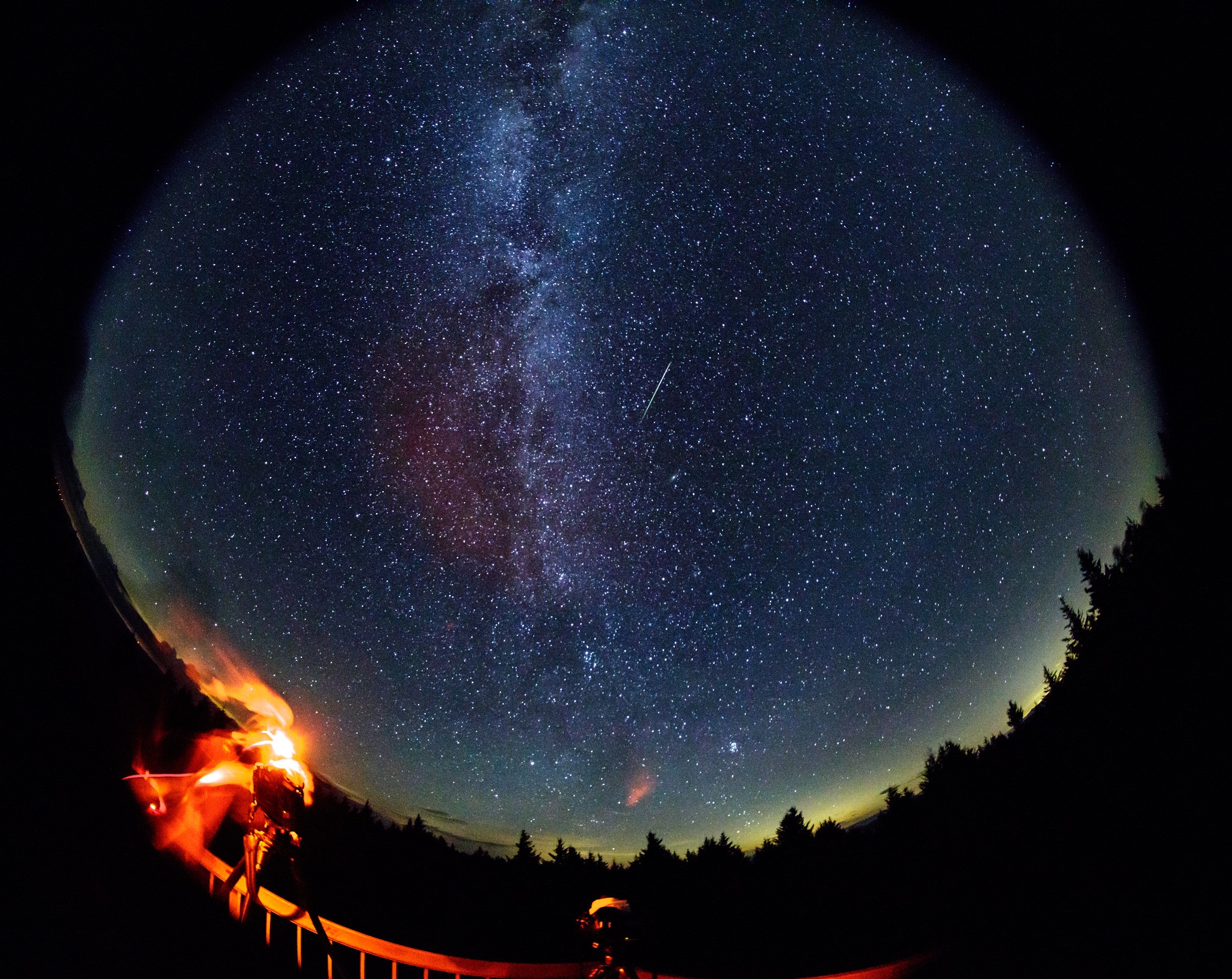 Perseid meteors are already beginning to fall in a display that promises to dazzle skywatchers this month.

The Perseid meteor shower will peak on the evening of Aug. 12, just four days after the new moon on Aug. 8, so dark skies should be quite favorable for the annual display, which is one of the most dependable displays of “shooting stars.” That’s in stark contrast to next August, when the meteors will coincide with a full moon.

Although rates of Perseids will be highest from the early morning hours of Aug. 12 until Aug. 14, all told, the meteor shower will last about two weeks, from July 25 to Aug. 18.

On the evening of Aug. 12, the moon will set at around 10:30 p.m. local daylight time. The display should peak later that night for observers throughout the Northern Hemisphere, especially as morning twilight begins. According to the 2021 Meteor Calendar of the International Meteor Organization (IMO), the Perseids should peak for 12 hours or so, centered on the time when the sun’s ecliptic longitude is 140.0° to 140.1° (equinox 2000.0), or  Aug. 12 from 3 to 6 p.m. EDT (1900-2200 GMT).

Observers in Eastern Europe are optimally positioned for the Perseid peak, but North Americans are not far behind. A single observer under dark, clear skies nominally may sight 60 shower members each hour, however, observers with exceptionally dark skies often record even larger numbers.

The Perseids are particularly attractive for introducing the public to astronomy because it is a celestial highlight that can be enjoyed without telescopes or other equipment. In planning a public outreach event, remember that the number of visible meteors can be enhanced substantially by selecting a very dark site that is free of bright lights, haze and smoke.

At the Perseids’ maximum, these meteors appear to diverge from a point called the “radiant” located near the famous Double Star Cluster in northern section of the constellation Perseus. As the night progresses, the radiant rises progressively higher into the sky in the northeast until the break of dawn ends observing.

In the United States, the radiant is so far north that it is above the horizon for most of the country when darkness falls. Hence some Perseids can be visible as soon as observing begins, although far fewer meteors appear before midnight, even on the night of the shower’s maximum.

Meanwhile, the radiant is always low or below the horizon for places south of the equator such as Australia, New Zealand and South Africa, where few, if any Perseids can be seen.

Meteors appearing close to the radiant — in Perseus and the nearby constellations of Cassiopeia, Andromeda and Auriga — have foreshortened tracks while those far from it will tend to be longer and faster.

The Perseids appear white or yellowish and are well known for featuring many bright and fragmenting meteors with fine long-lasting trains. The shower stems from the dross of Comet Swift-Tuttle, which orbits the sun, on average, about every 130 years.

Each time the comet passes close to the sun, as it did in 1992, it releases a trail of tiny particles along its orbit. The Earth passes close to the comet’s orbit in mid-August and interacts with these tiny bits of comet material, which ram into our atmosphere at about 37 miles (60 kilometers) per second.

In spite of the fact that most of this rubble is no larger than grains of sand, friction releases the kinetic energy of particles in short-lived flashes of light. The energy released per gram of the meteoroid’s weight far exceeds the energy efficiency of the most powerful human-made explosives.

A somewhat larger particle — say the size of a pea or pebble — can create the effect of a “shooting star” as brilliant as Jupiter or even Venus, while a meteoroid the size of a child’s marble can evolve into a dazzling fireball and blaze across the heavens with a brilliance approaching that of a full moon. Should it silently explode in flight, as sometimes happens to deathly cold objects that are suddenly heated to over 1,000 degrees Fahrenheit (540 degrees Celsius) within the span of a heartbeat, it is called a bolide.

Such outstandingly bright objects are admittedly few and far between, but you need only see one to make an entire night of skywatching worthwhile.

My most memorable Perseid sighting was one I didn’t actually see. It was while on a cruise ship in the Mediterranean, where I, like many of my fellow passengers were watching for Perseids. Suddenly, the entire deck of the ship was lit up for a brief moment as if a strobe had gone off. We all turned around and saw an incandescent contrail with a small blob at one end. It was obvious what had just happened: a fireball ended in a burst of light, leaving a vapor trail that became twisted and distorted, and taking nearly a minute to finally fade away.

Related: How to see the best meteor showers of 2021

To fully appreciate the Perseids, be sure that you’re comfortable. Instead of standing around and gaping at the sky (and risking a stiff neck), stretch out in an insulated sleeping bag or better yet, on a long reclining lawn chair covered by a heavy blanket.

Expect the effective temperature to be well below what your local weathercaster predicts: When you sit close to the rapidly cooling ground, even if the air is just a little damp, you can become quite chilled. In addition to layers, have some food to nosh on, as well as a beverage (but not liquor, for that will impair your alertness).

When you first head outdoors, give your eyes time to adjust to the dark; after about 20 minutes in darkness the pupils of your eyes open up like wells, collecting four or five times the light they do ordinarily. The longer you’re out in the dark, the more stars and meteors you will see. If you use a flashlight, cover the lens with red cellophane, since dim red light affects your eyes far less than white light.

Also consider gathering observations you can contribute to scientists. Amateur observers can make useful observations by counting meteors for several consecutive one-hour intervals on as many nights as possible throughout the duration of the shower. All you need is a pencil, clipboard and a lawn chair or blanket. To be truly meaningful, your count should be made from a wide-open area where nothing intrudes into your visual field.

Watch the sky attentively and, without looking down, make a note whenever a meteor is seen. Careful one-hour counts are valuable for determining when the shower reaches its peak strength and the rate at which activity increases or decreases. Record the beginning and end times of the observing session, and the times of any interludes when not watching the sky.

If two or more people observe, one should not record a meteor just because someone lets out a whoop! When groups observe, each individual’s counts should be reported separately, not combined with those of others in the party; pooled results of this sort are meaningless, since they cannot be turned into a standard single-observer hourly rate.

It is also important to separately count sporadic meteors — those that do not emanate from the Perseid radiant, and as such are not Perseids. On average, expect about 5 to 10 sporadic meteors per hour. Perseids on the other hand, can be identified by the fact that their tracks, if extended backward on the sky, lead to the radiant point in Perseus. If a pencil or a straight stick is held up in line with the meteor track, it will intercept the radiant. If the meteor does not meet this test, it is not a Perseid and may be classified as a sporadic.

For more details on counting meteors, the International Meteor Organization offers some suggestions.

You might also wish to try your hand at counting by magnitudes, plotting trails on star charts to determine radiants, recording colors, speeds and other characteristics of a shower. But attempting too elaborate a program may bring disappointment at the height of the shower, for meteors have a way of coming in bunches that defy counting, magnitude estimating and plotting all at the same time. If you are observing alone, just make hourly counts and estimate magnitudes; if in groups, assign each observer a limited program.

There are a few other reliable meteor showers occurring at other times of the year, but the Perseids are probably the easiest to watch. The Geminids are even more prolific, but they occur in mid-December, often on sharply cold nights. The Perseids come when the stargazer’s chief hazards are mosquitoes.

But keep in mind that the term “meteor shower” is a misnomer. If it’s a shower, it is very widely scattered; it’s more like waiting for the occasional drip of a faucet. But if you’re lucky enough and don’t try overly hard, you just might catch sight of a few beautiful shooting stars.

Good luck and clear skies to all!

Joe Rao serves as an instructor and guest lecturer at New York’s Hayden Planetarium. He writes about astronomy for Natural History magazine, the Farmers’ Almanac and other publications. Follow us on Twitter @Spacedotcom and on Facebook.