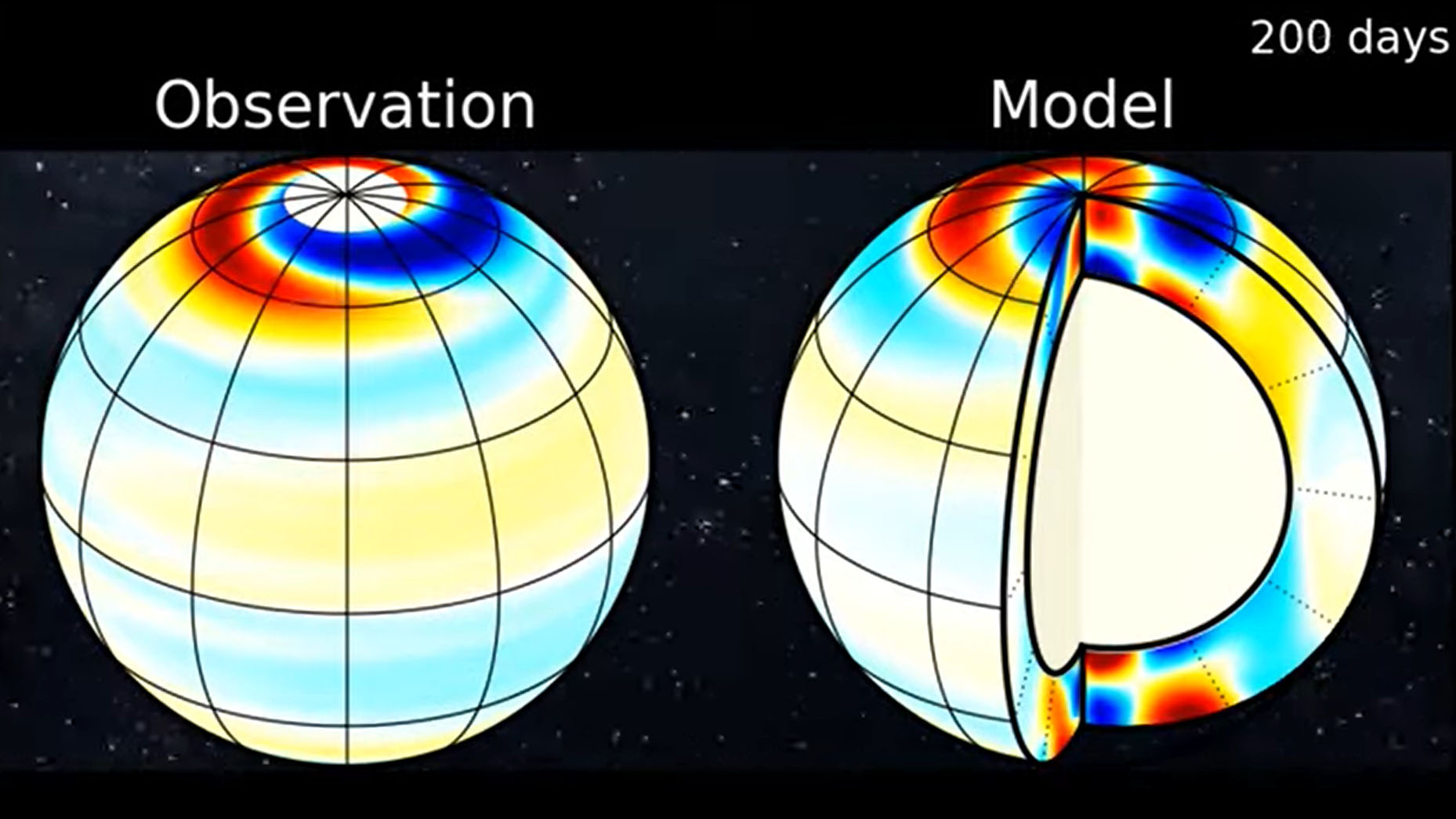 For the first time, scientists have observed giant slow-moving waves of plasma on the surface of the sun that could help to explain the mystery behind the star’s magnetic field.

Looking at ten years worth of data by NASA’s Solar Dynamic Observatory (SDO), researchers from the Max Planck Institute for Solar System Research (MPS) and the University of Göttingen, both in Germany, detected plasma swirls spreading through the solar surface at the slow speed of just 3 mph (5km/h), about as fast as a human walks.

As part of a new study, the scientists used computer models to recreate those waves and gain insight into their origin. They found that their motion is likely driven by the fact that different areas of the sun rotate at different velocities, a phenomenon known as the differential rotation of the sun. For example, while polar regions complete one rotation every 34.4 days, the sun’s equator spins around the axes within 25 days.

The recently observed waves cover large portions of the star’s surface and are much bigger than the previously known largest solar plasma waves described in 2013.

The team hopes that, by modeling how these waves look underneath the sun’s surface, they will be able to deepen their understanding of some of the processes that drive the behaviour of our host star.

One of these processes is the so-called solar dynamo, the motion of the plasma inside the sun which generates its magnetic field. The sun’s magnetic field, in turn, drives the solar cycle, the periodical ebb and flow of the star’s activity that is reflected in the number of sunspots and solar eruptions.

“The models allow us to look inside the Sun’s interior and determine the full three-dimensional structure of the oscillations,” Yuto Bekki, a graduate student at MPS and a co-author of the paper describing the findings, said in a statement.

The team observed several types of waves of various sizes oscillating with various frequencies. While some of the waves showed maximum speeds around the poles, others were at their fastest at mid-latitudes or around the equator.

“All of these new oscillations we observe on the sun are strongly affected by the sun’s differential rotation,” MPS heliophysicist and co-author Damien Fournier said in the statement.

Convective driving is the rising of the hot material from inside the sun towards its surface. The waves observed by SDO and reproduced in the models could rise from depths up to 125,000 miles (200,000 km), the edge of the sun’s so-called “convection zone.”

Scientists have known about short (about 5-minute) waves on the sun’s surface since the 1960s. They have successfully used these waves to learn about many processes inside the star in a similar manner that geologists study seismic waves rippling through Earth’s crust to learn about what’s going on in the planet’s interior. In fact, it was thanks to these waves that researchers were able in the past to reconstruct how the rotation of the sun’s material depends on depth and latitude. Over the past 40 years or so, some researchers have even speculated that longer period waves must exist.

“The discovery of a new type of solar oscillation is very exciting because it allows us to infer properties, such as the strength of the convective driving, which ultimately controls the solar dynamo, ” Laurent Gizon, lead author of the new paper said in the statement.

The team was able to confirm the results from SDO in data from the Global Oscillation Network Group (GONG), a network of six solar observatories in the USA, Australia, India, Spain, and Chile.

The study was published in the journal Astronomy & Astrophysics on Tuesday, July 20.