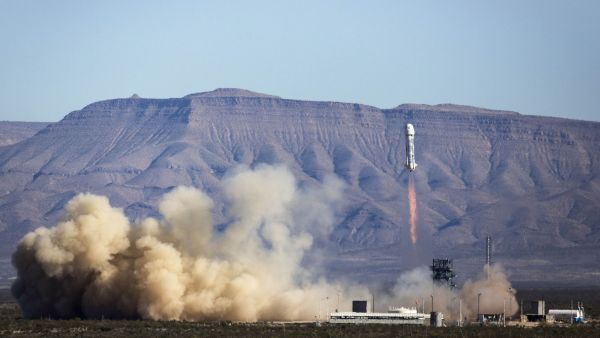 How much pollution is Jeff Bezos going to generate during his trip to space? It turns out that, when it comes to adding greenhouse gases to the atmosphere, Blue Origin’s New Shepard rocket should be among the cleanest launch vehicles around, though climate change concerns from suborbital spacecraft could increase as similar flights take off in the near future.

Rockets aren’t exactly green technology, and their overall environmental impact is still being studied. The vast majority of launches produce things like water vapor, carbon dioxide (CO2), soot, and aluminum oxides, depending on what type of fuel they use, according to a helpful explainer from the website Everyday Astronaut, which covers different aspects of spaceflight.

New Shepard, which billionaire Bezos will ride on its initial crewed flight today (July 20), is combining liquid hydrogen and liquid oxygen in its engine to generate thrust, meaning “the main emissions will be water and some minor combustion products, and virtually no CO2,” Darin Toohey, an atmospheric scientist at the University of Colorado, Boulder, told Live Science in an email. (Water — H2O — is composed of hydrogen and oxygen.)

Water in rocket exhaust can increase the number of clouds in the atmosphere, Toohey added, including the iridescent “mother-of-pearl” clouds often seen at sunset after a launch. These can impact the upper atmospheric layers known as the mesosphere and ionosphere, but because the number of rocket launches is so low at present, they are not much of a concern in climate modeling, he and a co-author wrote in a 2019 article for Eos, the news magazine of the American Geophysical Union.

That could change as launch rates increase in the near future, and a good deal of the Eos article involves a call for more studies of the potential impact from such flights.

Carbon dioxide pollution from spaceflight is still fairly negligible, with rockets accounting for around 0.0000059% of all CO2 emissions in 2018, according to Everyday Astronaut. (The airline industry was around 2.4% of global CO2 emissions that same year). But while ice and clouds can reflect sunlight back into space and reduce global heat, water vapor is a more potent greenhouse gas than carbon dioxide, and the longer that vapor remains in the atmosphere, the greater it will heat our planet.

“Water vapor up in the higher parts of the atmosphere are not completely harmless,” Florian Kordina, who wrote the Everyday Astronaut article, told Live Science in a direct message on Twitter. “But since New Shepard will cut off its engine relatively early in the flight, very little [water] will even get high enough to stay up there.”

The main concern when it comes to rocket flights are small particles such as soot and aluminum oxides, Toohey said. “These can have a disproportionate impact on the atmosphere,” he wrote. “A very small amount can make a big difference.”

In 2010, he and two other researchers modeled the effects of soot injected into the atmosphere from 1,000 private suborbital flights a year and found that they could increase temperatures over the poles by 1.8 degrees Fahrenheit (1 degree Celsius) and reduce polar sea ice levels by 5% to 15%.

But New Shephard’s engine doesn’t produce much in the way of particulates, Toohey said. “It might be among the cleanest of the fuels in that context.”