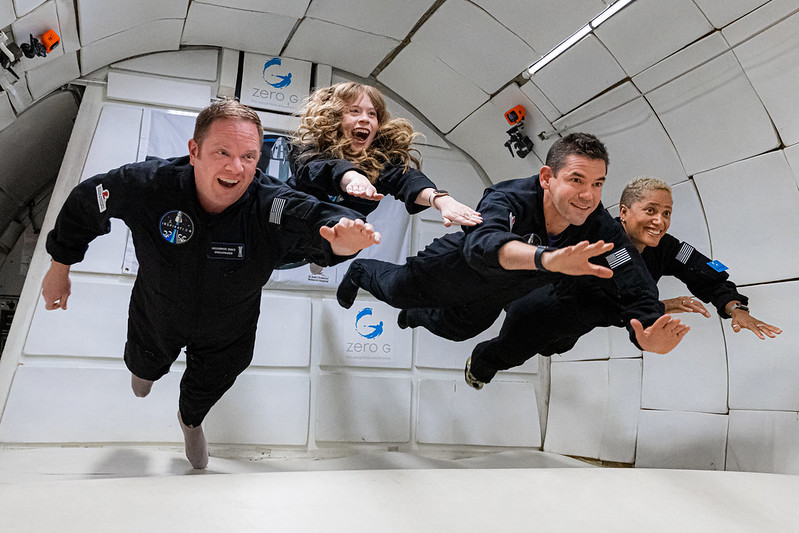 The first all-civilian orbital flight crew, Inspiration4, flew in zero gravity for the first time this weekend as part of preparations to launch in September.

A photo of the Inspiration4 crew floating in zero gravity was shared on the mission’s Twitter page. The crew was all smiles as the plane flew in alternating upward and downward arcs, also known as the parabolic maneuver, to create a microgravity environment in the aircraft cabin and allow passengers to experience brief periods of weightlessness.

Related: Fun in zero-g: Weightless photos from Earth and space

That weightless feeling. 🤩Our #Inspiration4 team experienced zero-g for the first time yesterday, flying parabolic arcs on a modified Boeing 727 aircraft — thanks @GoZeroG for the ride! pic.twitter.com/q3Lm05tYadJuly 12, 2021

Inspiration4 is the first all-civilian mission to space. The four private astronauts will launch to space aboard SpaceX’s Crew Dragon capsule Resilience for a three-day mission designed to raise money and support for St. Jude Children’s Research Hospital.

The zero-gravity flight was the crew’s latest training exercise ahead of their upcoming September launch. Since the crew is made up of “non-professional” astronauts, or people flying to space who are not affiliated with NASA or any other space agency, they have undergone rigorous training to prepare for the Inspiration4 mission. This includes centrifuge training at The National Aerospace Training and Research (NASTAR) Center in Pennsylvania, where the citizen astronauts were spun in circles to simulate the G-forces (gravitational forces) they’ll experience during their actual trip to space.

The crew also endured altitude chamber training at Duke Health in Durham, North Carolina, and hiked up the side of Mount Rainier in Washington together to practice working through difficult circumstances as a team. The four private astronauts hiked to a base camp thousands of feet above sea level, mirroring the tradition of professional astronaut crews ahead of missions to space.

Most recently, the crew has been learning how to fly a Crew Dragon spacecraft at SpaceX’s headquarters in Hawthorne, California. While the Crew Dragon capsule flies autonomously, Isaacman, who will be the commander of the flight, and Proctor, who will serve as pilot for the mission, have been training in SpaceX spacesuits and running through simulations to familiarize themselves with various aspects of the spacecraft.

Inspiration4 is targeted to launch no earlier than Sept. 15 from Launch Complex 39A at NASA’s Kennedy Space Center in Florida. The mission is expected to orbit Earth at an altitude higher than the International Space Station (ISS) — or farther than any human has been since astronauts last serviced the Hubble Space Telescope in 2009 — for three days, according to a press release. While in orbit, the crew will conduct science experiments and research from within the Crew Dragon spaceship.