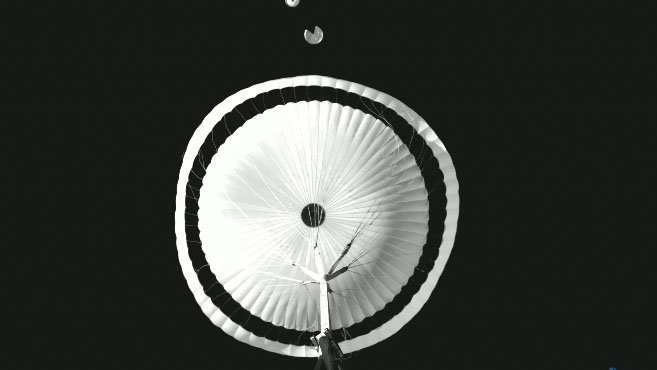 A mock-up of the ExoMars landing capsule survived a high altitude drop test but parachute problems, which have plagued the European/Russian Mars mission for years, are not yet completely resolved.

The 115-foot (35 meters) parachute that will slow down the European Space Agency’s (ESA) ExoMars life-hunting rover during its landing on Mars in 2023 has suffered “minor damage” during the latest high altitude drop test, ESA officials said in a statement.

Trouble with the parachute, which failed in previous drop tests in 2019 and 2020, was the main reason for the postponement of the mission from its previous launch date in 2020 to September 2022.

The second-stage parachute, which will open after the landing module slows down to subsonic speeds, still decelerated the mock-up of the ExoMars landing platform as expected during the tests performed at the Esrange Space Centre in Kiruna, Sweden, on June 24 and 26, ESA said in the statement.

During the tests, a helium-filled balloon lifted the capsule to an altitude of 18 miles (29 kilometers). The landing module mock-up was then dropped, releasing first its smaller, 50-foot (15 m) supersonic parachute, followed by the large subsonic one. The conditions during the test perfectly mimicked the pressure that will be exerted on the parachutes during the Mars landing, ESA said in the statement.

While the first-stage supersonic parachute performed without a hitch, the larger, subsonic, parachute was somewhat damaged during the test

“The performance of the second main parachute was not perfect but much improved (compared to the previous tests) thanks to the adjustments made to the bag and canopy,” Thierry Blancquaert, ExoMars program team leader said in the statement. “After a smooth extraction from the bag, we experienced an unexpected detachment of the pilot chute during final inflation.”

According to Blancquaert, the canopy of the 115-foot subsonic parachute was exposed to too much pressure as a result of the pilot chute problem.

“This created a tear that was contained by a Kevlar reinforcement ring,” Blancquaert said in the statement.

ESA said the parachute teams will investigate the issue and try to find a solution before the next series of drop tests planned for October and November this year.

Following the failed tests in 2019 and 2020, ESA turned to engineers from NASA’s Jet Propulsion Laboratory (JPL) in California who designed parachutes for the Perseverance and Curiosity rovers. The JPL teams helped to improve the design and tested the parachutes in their ground-based facilities that use compressed air to simulate the freefall.

ESA said they will again work with JPL to iron out the remaining problems. The agency also said they ordered backup parachutes from the U.S. manufacturer Airborne Systems, which made parachutes for Perseverance.

The landing system has been a major issue for ExoMars, a joint mission between ESA and Russia’s space agency Roscosmos. In 2016, the ExoMars test lander Schiaparelli crashed on Mars after its onboard computers miscalculated its distance from the ground. An investigation into the mishap found that the spacecraft started spinning after its parachutes opened, which overwhelmed the navigation and control system software.

During a descent to Mars, a landing capsule enters the planet’s atmosphere at the speed of 13,000 mph (21,000 kph), but that thin atmosphere on its own can’t sufficiently slow down a spacecraft for a soft landing. In the case of ExoMars, the capsule will first use its heat shield to slow down before deploying the supersonic parachute. After decelerating further, to less than the speed of sound, the large parachute will deploy. The spacecraft will eventually touch down with the help of backward-firing rockets.

“We’re very happy to report that the first main parachute performed perfectly: we have a supersonic parachute design that can fly to Mars,” Blancquaert said in the statement. “There will be at least two further opportunities to test this parachute design to gain further confidence.”

So far, only the U.S. and China successfully landed on Mars. Europe’s first attempt, the Beagle 2 lander, made in the U.K., landed safely but never transmitted any signals. In 2015, the probe was discovered in images captured by the HiRISE camera on NASA’s Mars Reconnaissance Orbiter, which revealed the lander’s solar panels failed to properly deploy, leaving its main communications antenna covered and unable to call home.