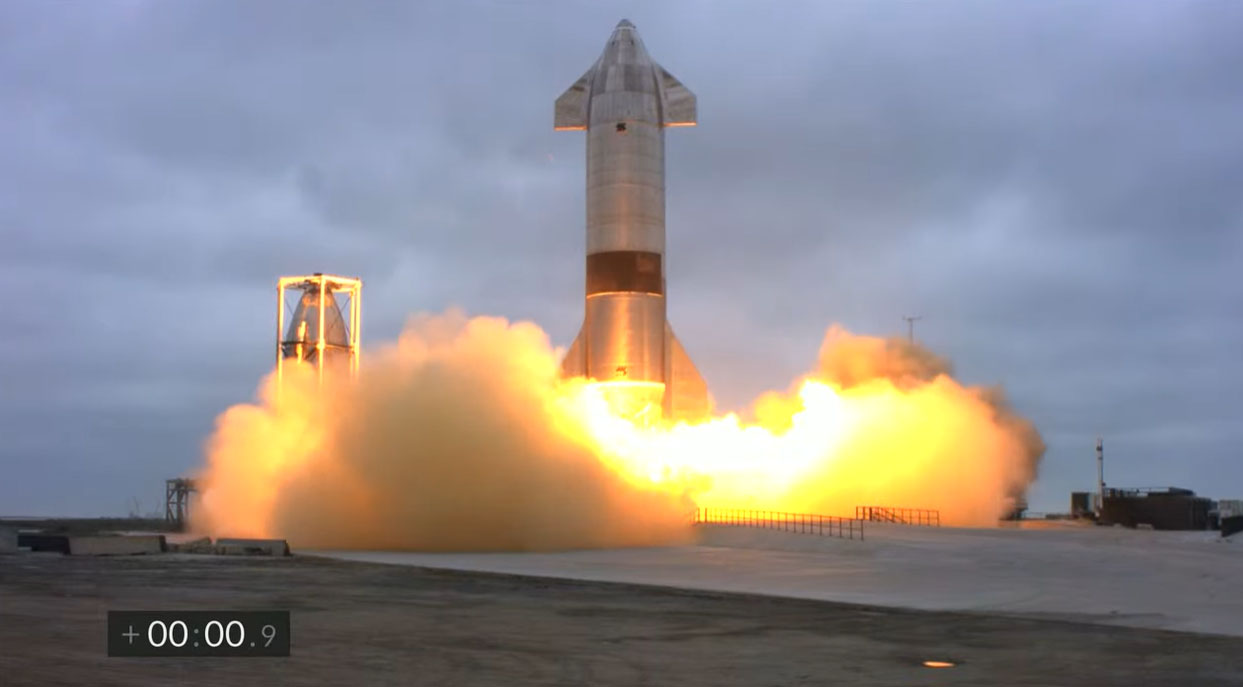 SpaceX president Gwynne Shotwell says the company is still “shooting for July” for the first orbital flight of its huge Starship Mars rocket, although she acknowledged the company may not meet that target.

“I’m hoping we make it, but we all know that this is difficult,” Shotwell said during the National Space Society’s International Space Development Conference on Friday (June 25).

“We are really on the cusp of flying that system, or at least attempting the first orbital flight of that system, in the very near term,” Shotwell said during the meeting, which was held virtually and is available for viewing on YouTube. She said there is a big internal push at SpaceX to develop Starship swiftly, as founder Elon Musk wants “a sustaining capability that will take people to the moon and Mars.”

Shotwell did not mention the lack of an orbital flight license from the U.S. Federal Aviation Administration (FAA), which has remained silent so far about what it thinks about the company’s orbital plans. An environmental assessment of Starship launch operations is currently being performed, CNN Business reported on June 16, and it’s unclear if FAA certification for the uncrewed orbital test flight will come in time to meet a July deadline.

“The FAA has not provided an update on the status of the environmental assessment, which would include publication of a draft version for public comment before a final version. It is unlikely that process could be done in time to support a launch in the near future,” SpaceNews reported on Saturday (June 26).

Earlier this month, CNN Business’ Jackie Wattles wrote that the reviews and approvals likely won’t be done in time for an early July launch, citing a source familiar with the licensing process.

“Depending on the outcome of that [environmental] assessment, it [SpaceX] may also be required to go through a more detailed review culminating in an updated environmental impact statement. Only after that process is complete can the Federal Aviation Administration move on to licensing a possible orbital Starship launch,” Wattles wrote.

Musk first tweeted about the July target back in March, about a week after SpaceX’s SN10 Starship prototype briefly stuck the landing after a 6-mile-high (10 kilometers) test flight but then exploded.

Then in May, SpaceX filed a flight plan with the U.S. Federal Communications Commission, around the same time that the SN15 prototype aced its 6-mile-high flight, a first for the Starship program.

The orbital flight plan stated that the Starship orbital mission will launch from the usual location near Boca Chica, Texas, for an ambitious round-the-world uncrewed flight that will splash down off the coast of Hawaii. If all goes to plan, the first-stage Super Heavy booster will come down in the Gulf of Mexico about six minutes after liftoff, roughly 20 miles (32 km) off the Texas coast. The Starship upper stage will soar into orbit and make a soft splashdown roughly 62 miles (100 km) off the northwest coast of the Hawaiian island of Kauai. (The 6-mile-high hops all employed just a Starship prototype, with no Super Heavy component.)

Related: SpaceX could land astronauts on the moon in 2024, Elon Musk says

Meanwhile, SpaceX continues to work on Super Heavy, which has not yet gotten off the ground. On June 15, for example, Musk tweeted a photo showing two pieces of the massive rocket about to come together.

While talking about Starship’s orbital shot, Shotwell also pointed to SpaceX’s anticipated primary commercial market for Starship, which is point-to-point deliveries of cargo and passengers. (Presumably these deliveries would help the company drive revenues while continuing to plan for eventual human Mars missions, which is SpaceX’s ultimate goal for Starship.)

“That will change the world for everybody, having that capability,” Shotwell said of SpaceX’s delivery system, “and I’m sure we’ll see good competition, stiff competition, there. Which we look forward to, of course.”

She also hinted that Starship could be used to clean up low Earth orbit from space debris. Historically, it’s been difficult to fund cleanups in this zone due to the large areas involved, not to mention legal and technical difficulties.

“I do think Starship is going to be a capability where we can go and pull space junk out of orbit,” Shotwell said. “I know it’s hard; I get that. But we’ve done lots of hard things in the past.”

In addition to providing an update on Starship, Shotwell spoke briefly about SpaceX’s Starlink constellation of satellites while accepting an award from the National Space Society. In about six weeks — that is, early to mid-August — the company hopes to have “global continuous coverage of the Starlink constellation,” she said.

SpaceX has been launching batches of Starlink satellites regularly, assembling a constellation that may eventually number in the tens of thousands. Astronomers continue to express concern about Starlink’s impact on the night sky. One spot of special concern is telescopes that image wide swaths of the sky for time-lapse images, for applications such as asteroid hunting. SpaceX, meanwhile, has been working to mitigate the brightness of individual Starlink satellites.