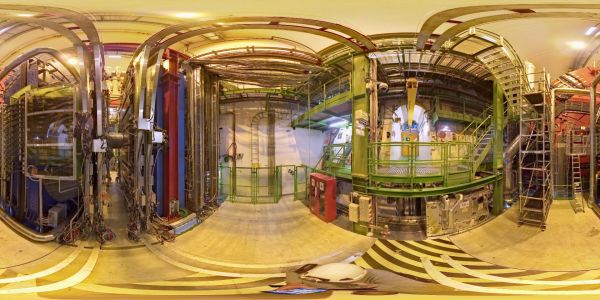 Smashing together lead particles at 99.9999991% the speed of the light, scientists have recreated the first matter that appeared after the Big Bang.

Out of the wreck came a primordial type of matter known as quark-gluon plasma, or QGP. It only lasted a fraction of a second, but for the first time, scientists were able to probe the plasma‘s liquid-like characteristics — finding it to have less resistance to flow than any other known substance — and determine how it evolved in the first moments in the early universe.

“This [study] shows us the evolution of the QGP and eventually [could] suggest how the early universe evolved in the first microsecond after the Big Bang,” said co-author You Zhou, an associate professor at the Niels Bohr Institute, University of Copenhagen in Denmark.

After the Big Bang, the universe was thought to be a soup of energy before it rapidly expanded during a period known as inflation, which allowed the universe to cool enough for matter to form. The first entities thought to emerge were quarks, a fundamental particle, and gluons, which carry the strong force that glues quarks together. As the universe cooled further, these particles formed subatomic particles called hadrons, some of which we know as protons and neutrons.

Scientists created this soupy stew at the world’s largest atom smasher, the Large Hadron Collider (LHC) on the border of Geneva, in Switzerland. By smashing heavy atomic nuclei together, the scientists could create a tiny fireball that effectively melts particles into their primordial forms for a fraction of a second. The scientists think they first created a QGP in 2000, but the latest batch, reported online on May 11, 2021 in the journal Physics Letters B, was the first time they could probe the characteristics of its liquid nature in detail. Since the plasma only lasted 10 to the minus 23 seconds, the scientists used new computer simulations along with the data they gathered from an instrument called ALICE — short for A Large Ion Collider Experiment — in the accelerator to figure out the properties of the matter and how it might have changed between the instant it formed and when it condensed into hadrons. They found the QGP was a perfect liquid — which means that it had almost no viscosity or resistance to flow — and it also changed shape over time in a manner unlike other forms of matter.

This information helps scientists understand what the universe was like in its first infant moments after the Big Bang. The scientists hope to uncover more details as the accelerator is upgraded and a new billion-dollar accelerator in the United States comes online. More studies could help scientists understand how the quarks and gluons are arranged into protons and neutrons and “potentially link to the earlier stage [called] quantum inflation in the Big Bang model,” Zhou said.