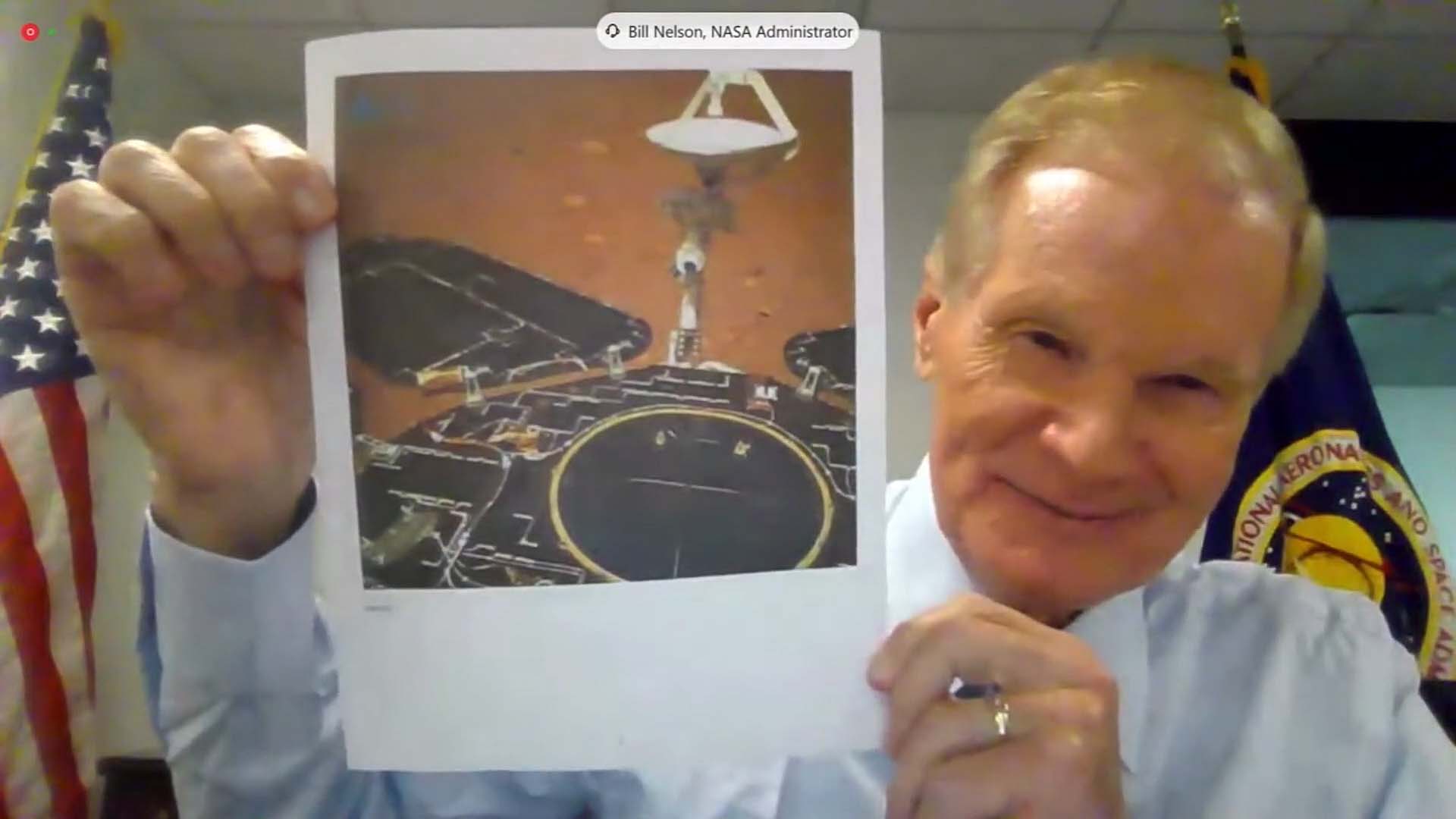 This May, China landed a rover on Mars, expanding the nation’s growing presence in space. The feat showed the world the nation’s space capabilities and fueled fires anew of competition in space but, is there truly cause for concern?

China became the second nation ever to successfully land on Mars when its Zhurong rover touched down May 14 on the Martian plain of Utopia Planitia . Zhurong’s arrival  followed NASA’s successful landing of its own Perseverance rover in Jezero Crater on Mars Feb. 18, this step is one of many being taken by China to expand its presence in space including the development of a space station and continued exploration of the far side of the moon by its lunar rover Chang’e 4.

However, while leaders in the U.S. space sector like new NASA Administrator Bill Nelson and the former astronaut Pam Melroy, the nominee for deputy administrator, congratulated China on this incredible accomplishment, they also shared words of caution with Nelson describing China as “a very aggressive competitor.”

In dramatic fashion, Nelson issued a warning to U.S. lawmakers during a May 19 congressional hearing, holding up a photo from Mars snapped by China’s Zhurong rover. “I want you to see this photograph … it is a very aggressive competitor,” he said about China.

“They’re going to be landing humans on the moon. That should tell us something about our need to get off our duff and get our Human Landing System program going vigorously,” Nelson said, adding that China’s recent progress in space adds “a new element as to whether or not we want to get serious and get a lot of activity going in landing humans back on the surface of the moon.”

Nelson seemed to imply that China’s success in space puts more pressure on NASA to land humans back on the moon. With its Artemis program, NASA is currently working to return humans to the lunar surface and establish a sustainable human presence on the moon by the end of the decade.

Nelson added that China is developing three “big landers” to land near the moon’s south pole, the same region Artemis aims to land. He also asserted, pointing to unnamed reports, that China is planning a flyby and a lunar landing this decade.

Nelson used his warnings on China’s progress to make the case for increased funding for the U.S. space agency. “NASA can’t do it alone,” he said. “We want a vigorous competition, but we’ve got to have the money in order to be able to do that.”

“Nelson knows that NASA needs more money than it currently has to carry out the Artemis program to return humans to the moon,” David Burbach, associate professor of national security affairs at the U.S. Naval War College in Newport, Rhode Island, told Space.com. Burbach’s comments are his personal opinion and do not reflect the opinions of his employer.

“I think it mostly was a very convenient way to remind the senators that there are competitors in space,” Burbach added. “I don’t think it’s likely that China is going to beat the U.S. back to the moon. And we certainly have an aggressive program of Mars exploration. “So I think it’s a stretch to suggest that China is about to surpass the United States in those areas. But Nelson is correct that China is quickly catching up to become a very serious player in deep space exploration.”

Nelson is not alone in his concern. Melroy was questioned about China’s activity in space during a Senate hearing on May 20 andpointed to China’s numerous recent achievements. “It’s not just the landing on Mars, which is very impressive, but also a couple of landings on the moon, and of course the new construction starting of a low Earth orbit space station,” Melroy said.

“China has made their goals very clear — to take away space superiority from the United States,” she added.

Not everyone feels the same way.

“I think China is a long way from taking away space superiority,” Burbach said. Rather, he added, “I think China is moving into the number two slot if there’s a global pecking order for space capabilities.” Burbach also raised the issue of what “space superiority” means, as “if we are talking about who does the most exciting or most challenging [things in space], I think the U.S. still is in a pretty good position.”

Not just about a rover landing

Melroy posits that herconcern doesn’t just arise from China’s continued accomplishments. “We are right to be concerned, when you add the other concerns of intellectual property theft and aggressive behavior in space.”

There have been concerns over the years about illegal information sharing as, by public law NASA “may not engage in any bilateral activities with China or Chinese-owned companies,” according to NASA. In fact, in January 2021, according to a report from Reuters, a NASA scientist pleaded guilty to lying about ties that he had to a Chinese government program that recruits researchers from abroad to develop relationships.

“NASA will continue to follow the law,” she continued. “It’s there to ensure that the U.S. thinks very carefully about any kind of engagement with China. However, we have to operate together in the space domain. So there are times when it’s in the best interest of the United States to talk to China.”

In May, China sparked worldwide concern when the nation’s Long March 5B rocket (CZ-5B), fell uncontrolled back to Earth. The rocket launched Tianhe, the first module for China’s new space station.While predictions estimated that it was unlikely that the booster or pieces of the booster would land in a populated area, it remained a possibility. Luckily, the rocket’s remains fell in the Indian Ocean, wellaway from populated areas, but the danger sparked quite a bit of worry both at NASA and around the world.

“Spacefaring nations must minimize the risks to people and property on Earth of re-entries of space objects and maximize transparency regarding those operations,” Nelson wrote in a statement before the rocket crashed back to Earth.

“It is clear that China is failing to meet responsible standards regarding their space debris. It is critical that China and all spacefaring nations and commercial entities act responsibly and transparently in space to ensure the safety, stability, security, and long-term sustainability of outer space activities,” he added.

“Landing a rover on Mars doesn’t impact America’s national security, but China is working on other types of space capabilities and technologies that impact America’s national security,” Brain Weeden, director of program planning at Secure World Foundation, told Space.com in an email. Weeden’s comments are his personal opinion and do not reflect the opinions of his employer.

China’s accomplishments on Mars and the moon aside, the country has been steadily working on military uses of space including anti-satellite missile testing, and, according to a 2018 report, developing hypersonic weapons, activities which the U.S. department of defense has been watching. At the same time, China has been reaching out to other countries to expand international cooperation, most recently by agreeing to build a research station on the moon with Russia.

Looking to the future

So what’s next? China continues to develop its space station and explore Mars and the moon as the U.S. continues its many space ventures. With the law prohibiting bilateral activities between NASA and China, collaboration in general is extremely limited.

However, despite political constraints on information sharing, academic researchers will go on to publish papers about Zhurong’s findings on Mars. As it’s not a direct transfer of information between the two nations, this is a small way in which, in the U.S. and abroad, scientists can benefit from exploration no matter which country’s rover collected the data.

“The Chinese lunar rover results have been published in scientific journals,” TK Edwin Wright told Space.com. “So the results are shared in that way with the community.” Additionally, while NASA scientists are not able to work with China, “academic scientists are free to collaborate with Chinese scientists,” he added.

Currently, competition seems to outweigh collaboration as both nations continue to push the boundaries of science and technology in space. Still, as we have seen throughoutNASA’s history, especially with the political pressures of the 1960s”space race” with the former Soviet Union that droveNASA to land the first humans on the moon, competition can spark innovation.

“I hope that this competition spurs both the U.S. and China and others to advance space technologies and capabilities that result in more benefits for everyone on Earth,” Weeden said. “But if there’s too much emphasis on the ‘us or them’ rhetoric, the competition in space could worsen tensions here on earth that leads to conflict, which would be bad for everyone.”

The possibility of increased political and also social tension is an added concern, especially as studies have shown that anti-Asian hate crimes increased in 2020 and continue to rise in 2021 (fueled in part, experts think, by the COVID-19 virus originating in China).

“For the last four plus years, many in the U.S. have been making China out as the enemy without always distinguishing between the Chinese people, the country of China, and the ruling Chinese Communist Party,” Weeden said. “The hard part is calling out the irresponsible behaviors of the government, like the CZ-5B reentry, while not making it a racist indictment of an entire people or culture.”