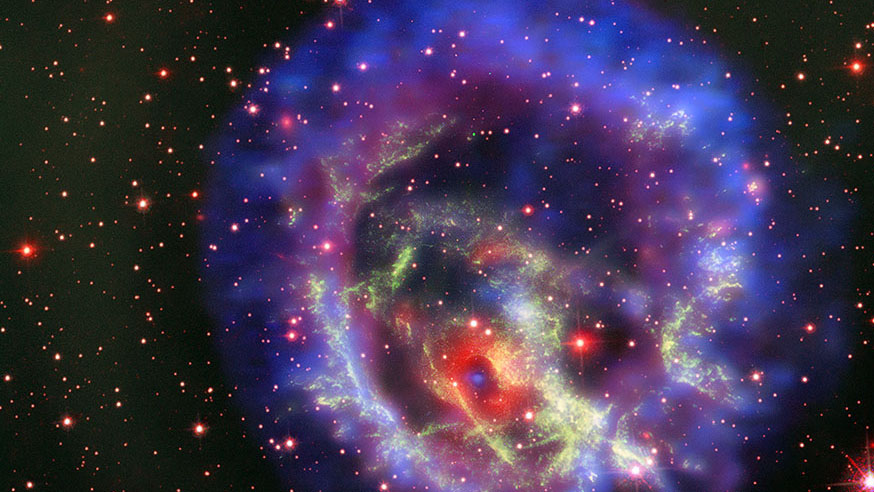 Scientists have made new estimates of the size of mysterious neutron stars, revealing that the ultradense stellar corpses are slightly larger than previously thought.

According to the new estimates, published April 27 in the journal Physical Review Letters, neutron stars — the densest known objects in the universe aside from black holes — have a radius of between 8.2 and 8.9 miles (13.25 and 14.25 kilometers).

Previously, it was believed these stars, leftovers of huge supernova explosions, have a slightly smaller radius of up to 7.5 miles (12 km). Within this relatively small radius (whichever one you look at), an amount of matter is squeezed that equals that of 1.4 masses of the sun. The sun, in comparison, has a radius of 432,169 miles (695,508 km).

The researchers made the new estimates not by measuring neutron stars directly, but by looking at the so-called “neutron skin,” or an outer layer of neutrons, surrounding the nucleus of a lead atom.

“There is no experiment that we can carry out in the laboratory that can probe the structure of the neutron star,” Jorge Piekarewicz, a nuclear physicist at Florida State University and one of the authors of the recent paper, said in a statement. “A neutron star is such an exotic object that we have not been able to recreate it in the lab. So, anything that can be done in the lab to constrain or inform us about the properties of a neutron star is very helpful.”

The recent work of Piekarewicz and his colleagues looks at results of an experiment called PREX (for Pb Radius Experiment, Pb being the chemical symbol for lead), conducted recently by physicists at the Thomas Jefferson National Accelerator in Virginia. The researchers probed lead atoms with electron beams and found that the neutron skin of the lead isotope Pb-208 is 0.28 femtometers (0.28 trillionths of a millimeter) thick, about double the thickness predicted by theorists. That study was also published April 27 in the journal Physical Review Letters.

Atoms generally contain positively charged protons, negatively charged electrons and neutrons, which have no charge. Protons are squeezed in the atom’s nucleus while electrons make up its outer shell. With neutrons, it’s a bit more complex.

Heavier atoms, such as lead, usually have more neutrons. Some of these neutrons are squeezed in the nucleus together with the protons, but not all of them fit there. The rest is pushed out toward the edge of the nucleus, where it forms what physicists call the neutron skin.

The most common isotope of lead, Pb-208, which is frequently used for experiments, contains 82 protons and 126 neutrons. Physicists know that the size of the skin correlates with the size of the atom. Piekarewicz believes the same can be assumed about the much bigger and denser neutron stars.

“The dimension of that skin, how it extends further, is something that correlates with the size of the neutron star,” Piekarewicz said in the statement.

Related: What makes the strong force so special?

Piekarewicz, however, added that his estimates were rather preliminary, and more work and advancements in technology would be needed for scientists to really get a proper grasp of neutron stars.

“It’s pushing the frontiers of knowledge,” Piekarewicz said. “We all want to know where we’ve come from, what the universe is made of and what’s the ultimate fate of the universe.”

The NASA Neutron Star Interior Composition Explorer (NICER) telescope, mounted on the International Space Station since 2017, has enabled astronomers to make measurements of the size and mass of some neutron stars, but a lot of what astronomers assume about these mysterious objects remains based on theory.