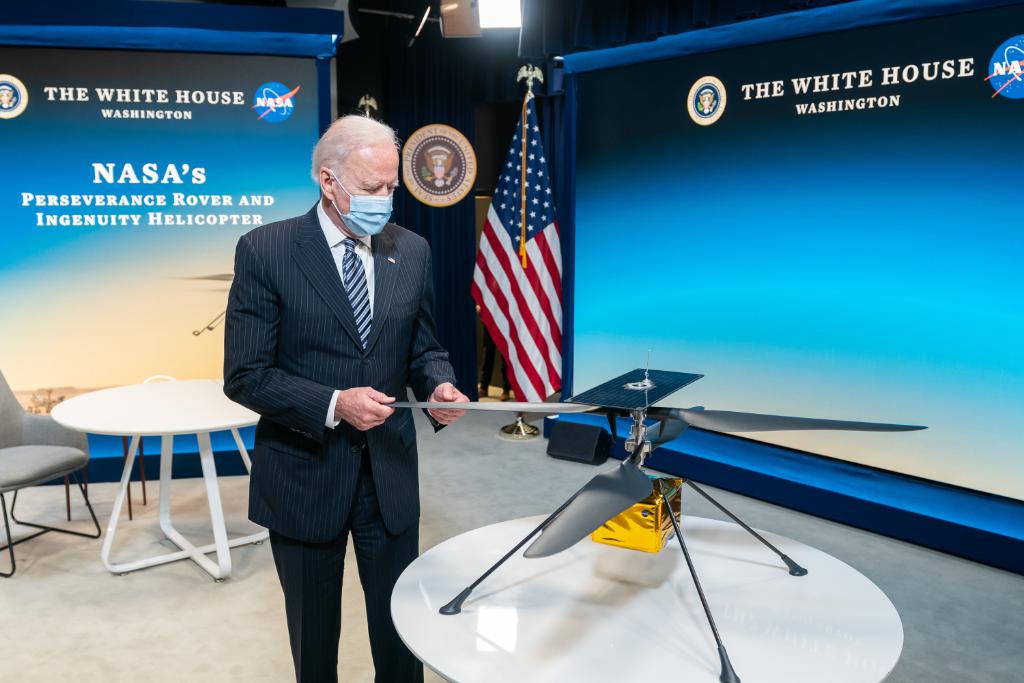 The first-ever powered, controlled flight on Mars got a presidential thumbs-up.

President Joe Biden tweeted his support for the Ingenuity team after the little helicopter’s record-setting Mars flight on Monday (April 19).

“Today, the Ingenuity Mars Helicopter achieved liftoff — becoming the first aircraft to fly on another planet. NASA proved once again that with relentless determination and the power of America’s best minds, anything is possible,” Biden tweeted that day, along with a picture of him with a model of the 4-lb. (1.8 kilograms) chopper.

Today, the Ingenuity Mars Helicopter achieved liftoff — becoming the first aircraft to fly on another planet. NASA proved once again that with relentless determination and the power of America’s best minds, anything is possible. pic.twitter.com/elC4KPgSOLApril 19, 2021

Ingenuity, a technology demonstration that landed with NASA’s Perseverance rover on Feb. 18, is designed to show that aerial exploration is feasible on Mars. The little helicopter will make up to five flights during its month-long operational window, which closes in two weeks.

“His first words were ‘Congratulations, man,’ and I knew it was him,” Jurczyk said in February of the call. “He talked about how proud he was of what we had accomplished.”

Also, the recently released federal budget request for 2022 allocates $24.7 billion to NASA and includes discretionary funding for an important follow-on to Perseverance’s work —hauling to Earth samples that the rover will collect.

In larger NASA news, on March 19 Biden nominated a permanent administrator for the agency — veteran politician Bill Nelson, whose Senate confirmation hearing occurred on Wednesday (April 21). Nelson’s speedy path to the Senate contrasts with that of previous NASA chief Jim Bridenstine, who was narrowly confirmed in 2018 after a 15-month wait.

The first-ever powered, controlled flight on Earth was performed by Orville and Wilbur Wright at Kitty Hawk, North Carolina on Dec. 17, 1903. Among the Wrights’ many accolades, President William Howard Taft presented the brothers with the Aero Club of America gold medals in the East Room of the White House in 1909. At the time, Taft said the medals were “the first presidential recognition of aeronautics since President [George] Washington.”