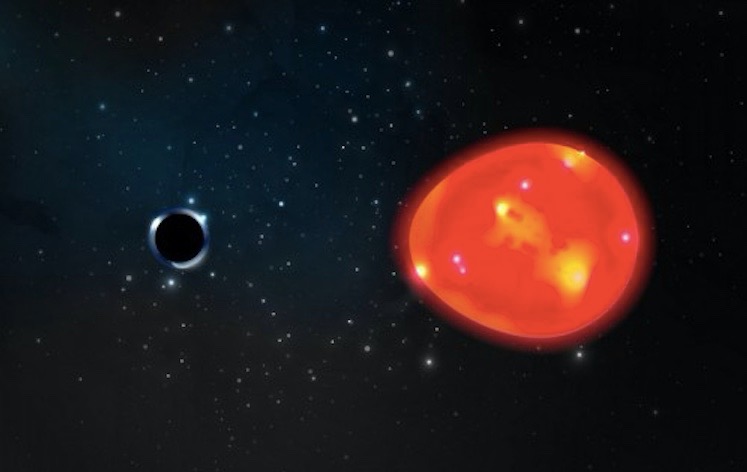 Astronomers have apparently found the closest known black hole to Earth, a weirdly tiny object dubbed “The Unicorn” that lurks just 1,500 light-years from us.

The nickname has a double meaning. Not only does the black hole candidate reside in the constellation Monoceros (“the unicorn”), its incredibly low mass — about three times that of the sun — makes it nearly one of a kind.

“Because the system is so unique and so weird, you know, it definitely warranted the nickname of ‘The Unicorn,'” discovery team leader Tharindu Jayasinghe, an astronomy Ph.D. student at The Ohio State University, said in a new video the school made to explain the find.

Related: The strangest black holes in the universe

“The Unicorn” has a companion — a bloated red giant star that’s nearing the end of its life. (Our sun will swell up as a red giant in about five billion years.) That companion has been observed by a variety of instruments over the years, including the All Sky Automated Survey and NASA’s Transiting Exoplanet Survey Satellite.

Jayasinghe and his colleagues analyzed that big dataset and noticed something interesting: The red giant’s light shifts in intensity periodically, suggesting that another object is tugging on the star and changing its shape.

The team determined that the object doing the tugging is likely a black hole — one harboring a mere three solar masses, based on details of the star’s velocity and the light distortion. (For perspective: The supermassive black hole at the heart of our Milky Way galaxy packs about 4.3 million solar masses.)

“Just as the moon’s gravity distorts the Earth’s oceans, causing the seas to bulge toward and away from the moon, producing high tides, so does the black hole distort the star into a football-like shape with one axis longer than the other,” study co-author Todd Thompson, chair of Ohio State’s astronomy department, said in a statement. “The simplest explanation is that it’s a black hole — and in this case, the simplest explanation is the most likely one.”

That explanation, likely though it may be, is not set in stone; “The Unicorn” remains a black hole candidate at the moment.

Very few such super-lightweight black holes are known, because they’re incredibly hard to find. Black holes famously gobble up everything, including light, so astronomers have traditionally detected them by noticing the impact they have on their surroundings (though we did recently get our first direct image of a black hole, thanks to the Event Horizon Telescope). And the smaller the black hole, the smaller the impact.

But efforts to find extremely low-mass black holes have increased significantly in recent years, Thompson said, so we could soon learn much more about these mysterious objects.

“I think the field is pushing toward this, to really map out how many low-mass, how many intermediate-mass and how many high-mass black holes there are, because every time you find one it gives you a clue about which stars collapse, which explode and which are in between,” he said in the statement.

Jayasinghe and his team report the detection of “The Unicorn” in a paper that’s been accepted for publication in the journal Monthly Notices of the Royal Astronomical Society. You can read it for free at the online preprint site arXiv.org.