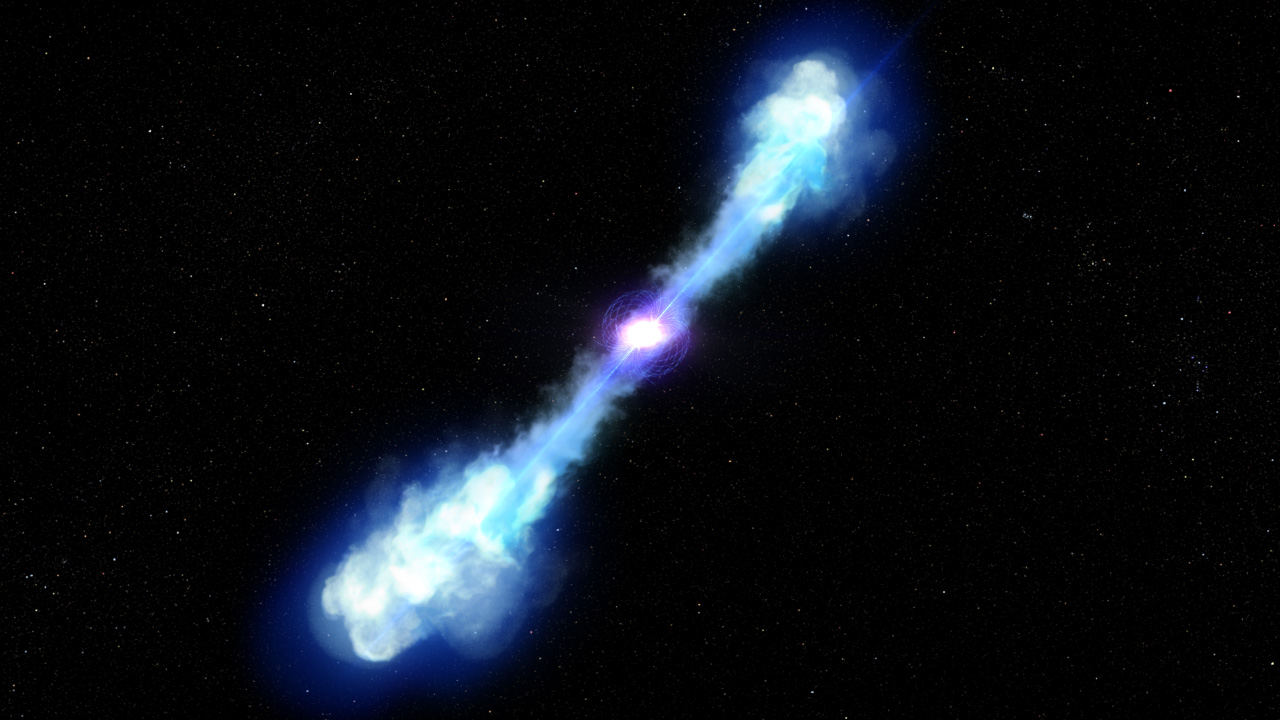 Paul M. Sutter is an astrophysicist at SUNY Stony Brook and the Flatiron Institute, host of Ask a Spaceman and Space Radio, and author of How to Die in Space. He contributed this article to Space.com’s Expert Voices: Opinions and Insights.

Short gamma-ray bursts, which as the name implies are brief blasts of high-energy gamma rays, tend to appear far away from their host galaxies.

For years, astronomers have thought that this means they get a “kick” when they’re born. But new observations prove otherwise: we’ve just been missing all the stars in their neighborhood.

It took astronomers a long time to figure out what in the universe was causing short gamma-ray bursts. These bursts, lasting less than about two seconds, were first spotted by the United States military when it developed orbiting gamma-ray detectors to sniff out sneaky Soviet nuclear tests. When the detectors went wild (and the panic went away), U.S officials realized that the distant cosmos was much more active than their Cold War adversaries.

The reason that astronomers were having such a tough time of it was that short gamma-ray bursts are a) short and b) rare. That’s a nasty combo for a group of people who depend on being able to see the same thing over and over again to get a handle on it.

Whatever was causing these short bursts, it was brutally energetic and relatively small, even smaller than a star. Astronomers could estimate that last bit based on the duration of the event itself. The average short gamma-ray burst event is around 0.2 seconds long, and if you want an object in space to do something (like, say, blow up), then its actions are always limited by the speed of light. If the event lasts for 0.2 seconds, then that means that one end of the object can be no further than 0.2 light-seconds away from the other end. That comes out to about four times the diameter of Earth.

Adding to the mystery, it wasn’t until 2005 that astronomers finally caught an afterglow from a short gamma-ray burst. Prior to that discovery of X-ray flashes lasting for hours after the main event, all the bursts were isolated affairs.

And it wasn’t until 2017 when astronomers got the final, decisive clue, when a short gamma-ray event coincided with the detection of a gravitational wave. That particular gravitational wave carried the signature of two neutron stars merging — a so-called kilonova.

Far away from home

Even though astronomers had finally figured out what caused short gamma-ray bursts, one big mystery remained: their location. Unlike their longer-lasting cousins (long gamma-ray bursts), many of the short ones tended to come from regions of the universe relatively far away from galaxies. They’re not a part of the normal stellar population.

Linking a powerful, rare event like this to its surroundings is a useful astronomical trick. For example, before we fully understood what causes the various kinds of supernovae, astronomers noticed that the Type II class tend to come from elliptical and spiral galaxies, while Type I come from basically wherever. That helped us understand their identities: Type II come from the deaths of massive stars, which are manufactured in abundance within star-forming ellipticals and spirals, whereas Type I come from the destruction of white dwarfs, a much more common and long-lived object that can live anywhere.

And so astronomers have been puzzled by the location of many short gamma-ray bursts. They most definitely come from stars (the neutron stars behind the kilonova events are the remnant cores of large stars), but the short gamma-ray bursts weren’t embedded inside a population of older stars…or any stars at all, for that matter.

This led astronomers to suspect that before neutron stars slam together in a kilonova flash, complicated dynamics “kick” them out of their home and away from their host galaxies. Then, wandering the lonely intergalactic depths, the neutron stars coalesce, leading to a short gamma-ray burst, that one blast of light the only sign of their existence.

Stacks and stacks of stars

Another possibility, as suggested by a paper recently appearing in the preprint journal arXiv, is that we’re getting it all wrong.

By far the vast majority of the stars in a galaxy are concentrated in the very center or within a thin disk. Typically, less than 2% of all the stars are found in the region called the “halo,” which can extend anywhere from 10,00 to 100,000 parsecs away from the galaxy proper. (One parsec is about 3.26 light-years.) Hence the simple reasoning that if we see a large proportion of short gamma-ray bursts coming from within the halo, and stars there are comparatively rare, then the neutron stars that led to the burst must have come from somewhere else.

However, because galaxies are so bright, and there are relatively few stars in the halo, it’s actually notoriously difficult to measure the number of halo stars for any given galaxy. Thus when astronomers have said something like “short gamma-ray bursts come from a very empty halo,” that’s only true in an average, statistical sense.

So the astronomers behind the new study took very deep, long looks at the galaxies that have hosted short gamma-ray bursts — and found that those events were not as isolated as they seemed. In all the cases, they found populations of old stars reaching away from the galactic disk and into the regions of the bursts. Those old stars are more likely to have stellar remnants, like neutron stars, that would eventually collide in an kilonova blast — and an associated short gamma-ray burst.

The conclusion is that there’s no need for a kick. There’s not even really a mystery. Short gamma-ray bursts that occur far outside their host galaxies are there because there are actually more stars in their vicinity than we thought. Neutron stars don’t get randomly ejected from their host galaxies as often as we might have thought. Which, considering just how violent the universe can be, is perhaps the more surprising answer.

Learn more: “No velocity-kicks are required to explain large-distance offsets of Ca-rich supernovae and short-GRBs“