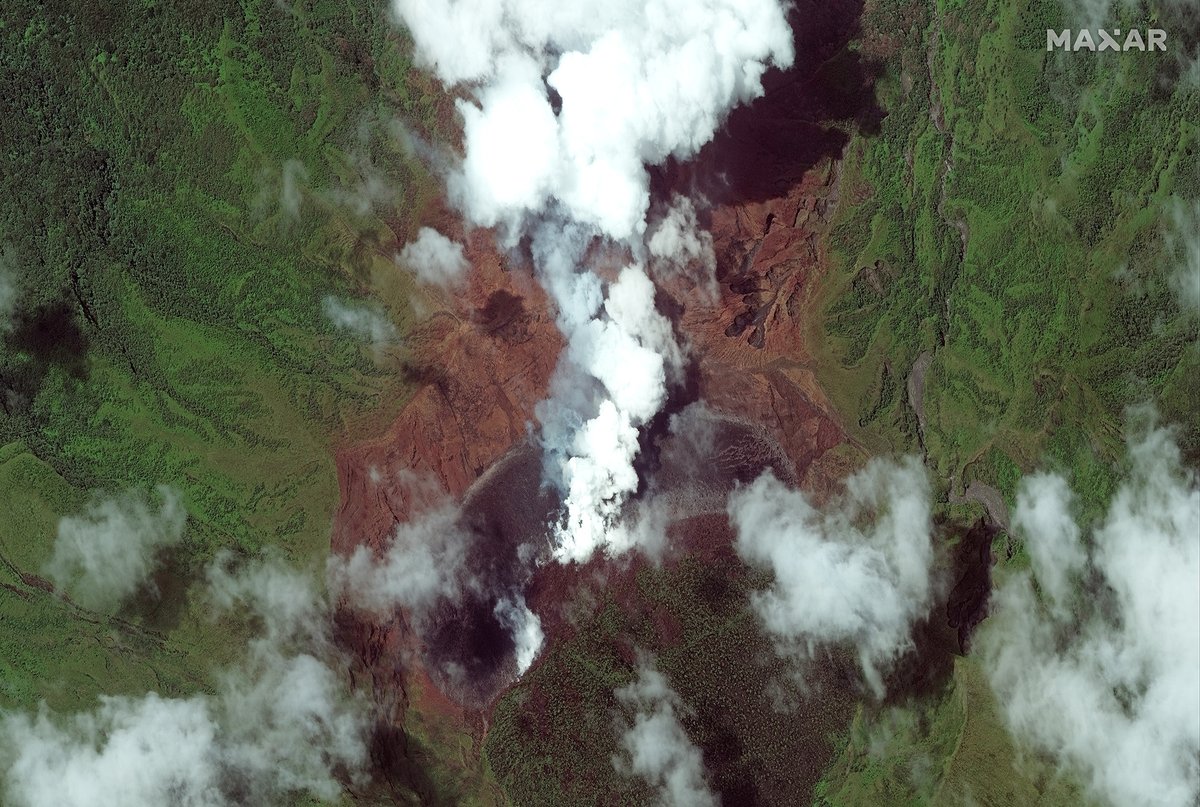 New satellite imagery captures the relentless eruptions of the La Soufrière volcano on St. Vincent, which began on Friday (April 9).

La Soufrière, which last erupted in 1979, is located on the eastern Caribbean island of St. Vincent. After decades of inactivity, the volcano started rumbling late last year, when scientists noticed a new lava dome had formed, oozing lava in the volcano’s summit crater.

Satellites operated by NASA, the National Oceanic and Atmospheric Administration (NOAA) and Maxar Technologies have been tracking the La Soufrière volcano as it continues to spew smoke and debris miles high into the atmosphere, blanketing surrounding communities and creating heavy ashfall since its initial eruption on April 9.

#LaSoufriere #volcano, on the main island of St. Vincent and the Grenadines erupts, spewing ash and smoke for miles. Up to 20,000 people have been evacuated from areas surrounding the volcano. These WorldView-2 #satellite images are from April 8, 2021. pic.twitter.com/hOFv7X2rauApril 9, 2021

Maxar’s WorldView-2 satellite captured stunning aerial views of the volcano as billows of smoke poured out over the main island of St. Vincent and the Grenadines. Maxar Technologies shared the satellite images of the area, which were taken on April 8, when the local government issued evacuation orders for people in areas surrounding the volcano, ahead of its eruption.

The company also shared satellite views of the town of Richmond Vale before and after the volcano erupted. The GIF, which Maxar shared on Twitter, captures drastic atmospheric changes, as clear skies on April 2 quickly become shrouded by ash in photos taken Tuesday (April 13). Ash from the ongoing eruptions has spread hundreds of miles eastward, impacting the skies above neighboring Carribean islands.

Before and after #satellite imagery of the town of Richmond Vale on the island of #StVincent, seen on April 2 and today, April 13, with most of the area covered in a blanket of ash from the ongoing eruption of the #LaSoufriere #volcano. pic.twitter.com/mSFtKvRWsoApril 13, 2021

NOAA satellites have also recorded the aftermath of the volcanic explosion. A timelapse of images from the GOES East satellite captures plumes of ash and smoke above St. Vincent island, as the volcano continually erupted throughout the day on April 11.

“The volcano continues to periodically erupt, and volcanologists say the activity could continue for weeks,” the NOAA wrote on Twitter.

Before and after #satellite imagery of the town of Richmond Vale on the island of #StVincent, seen on April 2 and today, April 13, with most of the area covered in a blanket of ash from the ongoing eruption of the #LaSoufriere #volcano. pic.twitter.com/mSFtKvRWsoApril 13, 2021

The NOAA’s GOES-16 weather satellite captured an up-close view of one of the explosive eruptions that occurred over the weekend. The imagery, shared April 12, shows a massive burst of ash and debris, which extended thousands of feet in the atmosphere.

The GOES-16 satellite has been keeping a constant, watchful eye on the volcano since it first erupted. Satellite imagery from April 9 shows two views of the eruption: one captured in daytime true color, or “GeoColor,” imagery and another that shows the levels of sulfur dioxide in the atmosphere as the volcano’s ash plume explodes above the island.

UPDATE: The #LaSoufrière #volcano in St. Vincent & the Grenadines has erupted again today. @NOAA’s #GOES16🛰️ caught two views of it: (left) in #GeoColor imagery, and (right), in this SO2 composite, which detects the sulfur dioxide in the volcano’s #AshPlume. #lasoufriereeruption pic.twitter.com/MM1q9ZIW2uApril 9, 2021

Early Sunday morning, the Day-Night Band on the @jpssprogram’s #NOAA20 satellite saw the eruption of La Soufriere volcano on the eastern Caribbean island of St. Vincent, along with giant ash clouds and gravity waves over Barbados and other nearby islands. pic.twitter.com/EM33nIPF8KApril 12, 2021

La Soufrière erupted again on Tuesday (April 13), marking the fifth-straight day of explosions. Satellites will continue to observe the eruptions from space.