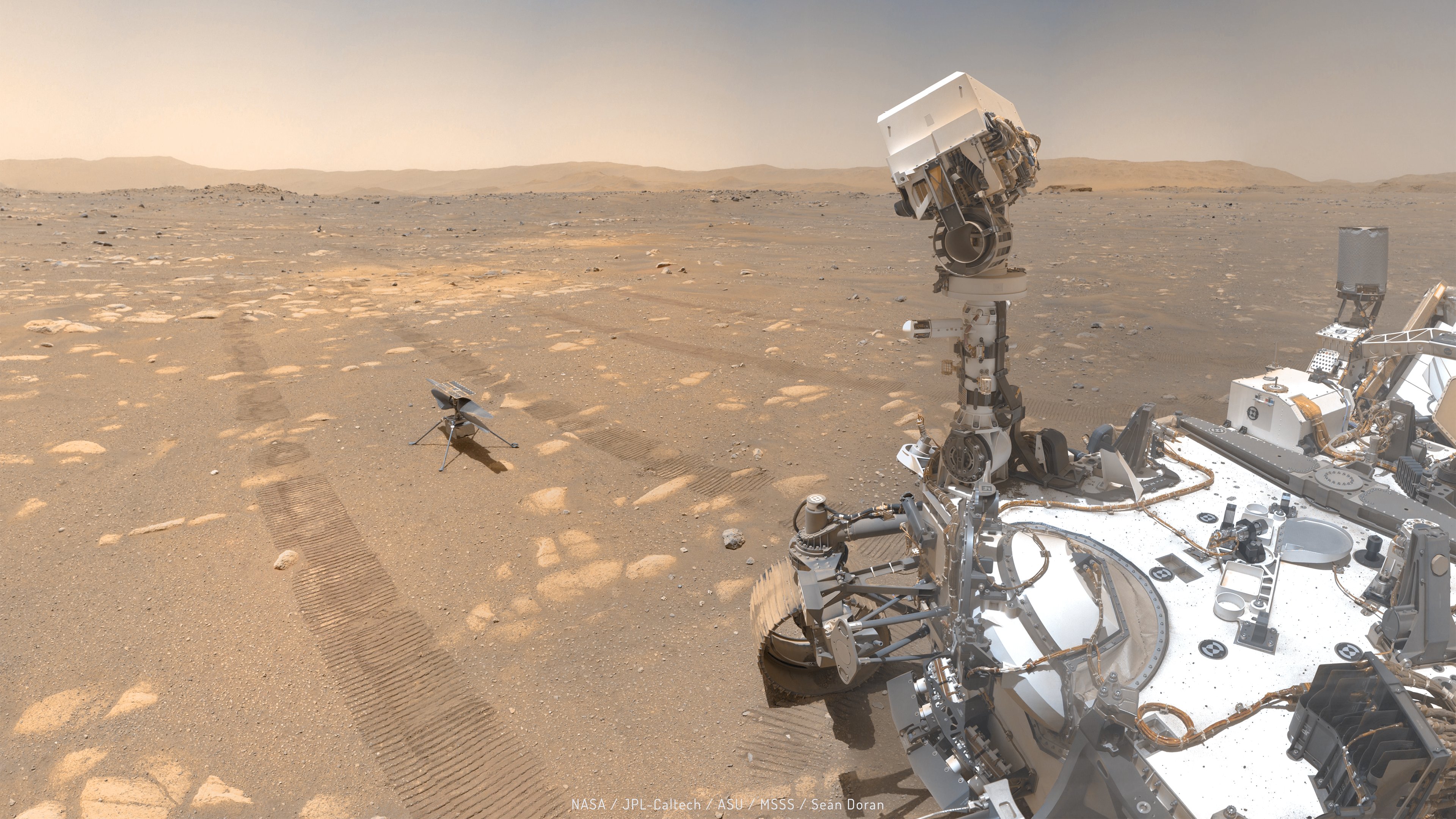 NASA’s education team hosted a special webcast for students on Thursday (April 8) to talk about the Mars helicopter Ingenuity and its upcoming first flight on the Red Planet.

The webcast, hosted by Brandon Rodriguez and Taryn Bailey from NASA’s Jet Propulsion Laboratory (JPL) in Southern California, provided an overview of Ingenuity’s historic mission and answered questions submitted by students. If you missed the live webcast, you can watch a replay on the JPL Education YouTube channel at any time.

The 4-lb. (1.8 kilograms) Ingenuity helicopter traveled to the Red Planet attached to the belly of NASA’s Perseverance rover, which landed on Mars on Feb. 18. Ingenuity dropped to the Martian surface on April 3 and is expected to make its first test flight this Sunday (April 11), demonstrating the feasibility of flying on another planet.

“If we can successfully prove that we can fly in a completely different atmosphere than what we are used to [on Earth], then that will usher in a new wave of technology across the board for future space exploration,” Bailey, an engineer at JPL, said in the video.

Ingenuity is equipped with four lightweight carbon-fiber blades, arranged into two rotors, or propellers, that spin in opposite directions at about 2,400 revolutions per minute in order to generate enough lift to fly through the Martian atmosphere, which is much thinner than Earth’s.

“Two propellers stacked on top of each other creates a more stable overall system,” Bailey explained during the webcast. “Newton’s [third] law of physics tells us that for every action, there is an equal and opposite reaction. So, having two counter-rotating propellers stacked on the same axis allows for the overall force of those two to cancel each other out, so that way you have a more stable system.”

The helicopter therefore shouldn’t wobble much as it rises into the Martian air.

The two rotor blades measure a whopping 4 feet (1.2 meters) from end to end, which “just goes to show you the type of proportional differences we have to make in the design in order to lift something in such a thin atmosphere,” Bailey said.

The helicopter will fly autonomously on Mars, without any real-time human intervention. Instead, it will communicate with the Perseverance rover to get its commands, which are pre-planned by NASA engineers. During the webcast, Bailey reviewed the helicopter’s planned flight paths. These begin on Sunday with a simple ascent of about 33 feet (10 m), at which point the helicopter will hover, take a few photos and then land.

If the helicopter succeeds on that first flight, it will attempt up to four additional test flights within a 31-day experiment window. Ingenuity’s subsequent flights will involve more sophisticated choreography, such as flying higher or farther distances, or even possibly flying out to a new landing site. However, the exact paths of the fourth and fifth flights are dependent on how the helicopter performs during the first three test flights, Bailey said.

“Seeing the evolution of Mars exploration — we went from Sojourner [the first Mars rover] to [Ingenuity] in just over 20 years,” Rodriguez said in the video. “We couldn’t even imagine what will come next at this pace.”

You can watch the webcast online, and kids can continue to participate in the Mission to Mars Student Challenge as the Perseverance rover and Ingenuity helicopter explore the Red Planet.