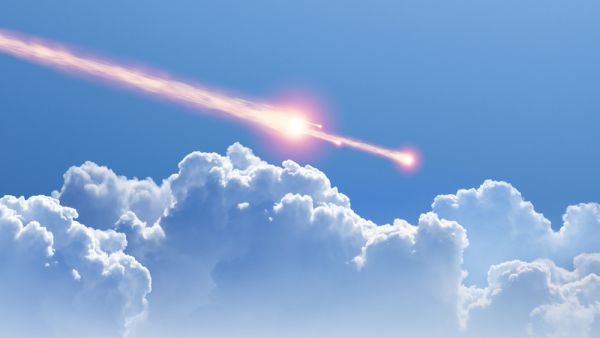 A rare daytime fireball meteor triggered a loud sonic boom across parts of the United Kingdom and France over the weekend.

The sonic boom occurred at 2:50 p.m. local time on Saturday (March 20) and was reportedly heard in southwest England, Wales and northern France, according to Sky News. At first, most people assumed that the noise was the result of fighter jets, but the Ministry of Defence quikcly announced that this couldn’t have been the case, according to the BBC.

However, a handful of people on Twitter said they had witnessed a bright flash of light across the sky at the same time, and thanks to satellite images, it was later confirmed to be a fireball meteor, according to the BBC.

The meteor was a bolide — the largest and brightest type of fireball meteor — and would have needed to be “very large” to be visible during the day, Richard Kacerek, from the UK Meteor Observation Network of amateur astronomers, told the BBC.

On Feb. 28, another large fireball meteor lit up the night sky over the U.K. and was seen by a potentially record-breaking number of people, Live Science previously reported.

What is a fireball meteor?

A fireball meteor is a type of extremely bright meteor that emits light equal to or greater than that of Venus in the night sky, according to the American Meteor Society (AMS).

Fireballs burn brightly because of their size and speed — most fireballs come from parent asteroids that are at least 3.3 feet (1 meter) across. As the meteor hits Earth’s atmosphere, it slows down due to friction and heats up, releasing energy in the form of visible light, according to the AMS.

The biggest and brightest fireballs, like this bolide, can be seen during the daytime, and because they often enter the atmosphere traveling faster than the speed of sound, they frequently create a sonic boom before they break apart.

Several thousand fireball meteors burn through Earth’s atmosphere every day. However, most go unnoticed because they are not bright enough to be seen during the daytime, or because they occur over the ocean and other uninhabited areas during the night, according to the AMS.

Sonic booms are normally an indicator that the meteor was large enough to land on Earth as  a meteorite.

“Normally when you hear that, it’s a good sign that you have got rocks that have made it to the surface,” Ashley King, a scientist with the UK Fireball Alliance (UKFall), told the BBC. “It’s incredibly exciting and I’m a bit stunned.”

After the Feb. 28 fireball meteor in the U.K. a family in Gloucestershire helped recover the meteorite after it landed on their driveway, Live Science previously reported.

Meteorites such as this can tell us more about our solar system and how it formed. UKFall has now asked for people in southwest England to be on the lookout for the new meteorite, according to the BBC.

However, some experts predict that it may have landed in the sea in the Bristol Channel, according to Sky News.